THE SCHOOL OF JOLLY DOGS© 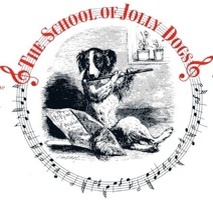 CONCEPT:  A jolly 19th-century musical revue set in a frayed but fabulous Music Hall in East London presided over by none other than Queen Victoria herself. As she herself admits: "When Albert's away, Vicky likes to play!" And where does the Queen go to give and get a command performance?  Why to her own private music hall where she revels in the company of her pet performers -- The School of Jolly Dogs. Marie Antoinette had Le Petite Trianon to act out her pastoral fantasies of being a shepherdess; Queen Victoria, who longed to sing and dance but was foisted into a life of duty, motherhood and empire-building yearned to tour the provinces with a rousing routine. The School of Jolly Dogs is a wildly ridiculous foray into the Queen's fantasy Music Hall life where she is attended to by her bevy of pet performers: the greatest singers, dancers, acrobats, serio-comics and more of the Victorian English Music Hall.

CAST: Seven person cast, plus one grand piano and one virtuosic pianist.

AVAILABLE:  For license; and/or a ready-to-go production for your theatre. Please contact us for more information.

"The School of Jolly Dogs" is an old-fashioned happiness fest, song and dance the English Music Hall way ...
This bright parody of the British music hall tradition includes whatever material seems theatrically, rather than historically correct ... The brand new "True to the Bard" is a clever tune composed by Leslie Steinweiss, the show's musical director, with lyrics by Denise Balle, the company's artistic director."  _ Newsday